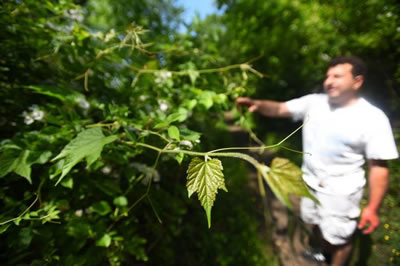 As peak gardening season lures North Jersey homeowners to landscape supply centers, they buy and cart home many shrubs and trees that — just over the state line in New York — are prohibited in suburban yards.

Many Northeast states have cracked down on the sale of non-native plant species because they out-compete and suffocate native plant species that birds, butterflies and other insects rely on for food. Some environmentalists describe these invasive non-natives as if they were thugs marauding through area forests.

These non-native species, often introduced to the United States for landscaping purposes, have escaped into the wild, and fighting them off has become a full-time job for nature centers. Naturalists argue that New Jersey should follow the lead of New York, Connecticut, Massachusetts and New Hampshire by banning the cultivation, sale or use of such popular landscaping species as burning bush, Japanese or common barberry, golden bamboo, Norway maple and Japanese angelica tree, among others.

“Our whole summer is taken up trying to keep invasives at bay,” said Sandy Bonardi, naturalist at Greenbrook Sanctuary in Tenafly. “New Jersey should absolutely follow what other states have done. I don’t know why we’re always behind the eight ball.”

Ryan Hasko, land manager at Flat Rock Brook Nature Center in Englewood, agreed. “We have seen encroachment of invasives from neighboring properties,” he said. “I think it would be a great idea to get aggressive invasives out of the landscape. If there’s still a seed bank for these species in our communities, then we’ll never get rid of them.”

But adopting such bans here could mean a financial hit for the state’s nurseries. New Jersey’s 630 nursery operations sold $350 million worth of plants in 2014. New Jersey’s nursery industry ranks in the top 10 nationally and is the largest in the Northeast, supplying garden centers from Georgia to Maine.

“Plants are different than non-living inventory,” said Dominick Mondi, executive director of the New Jersey Nursery and Landscape Association. Some shrubs and trees take years of cultivation before they are ready for sale. “There’s a lot of labor invested that’s lost if they can’t go to market,” Mondi said. “If a popular garden plant is legal for sale in other states and banned from growing or sale in New Jersey, that’s a severe market disadvantage for our nursery growers.”

On a recent walk along a trail at Celery Farm in Allendale, Michael Limatola, the marsh warden, stopped every few feet to lambaste another stand of invasive plants. “We’re constantly dealing with invasives,” he said. “We’ve had some success but others are big challenges.”

The Celery Farm trail served as a living exhibit of the most prevalent invasive plants in North Jersey. Near the entrance was a stand of Japanese knotweed. A little farther on, the handsome white flowers of a multiflora rose bush cascaded like a carpet over some native bushes smothered beneath. Next, two invasive vines — porcelain-berry and oriental bittersweet — entwined for dozens of feet up the trunk of a native ash tree, looking like a flowing green curtain. Thick stands of garlic mustard and burning bush bordered another stretch of trail.

“The multiflora rose — nothing eats it,” Limatola said, sighing. “The burning bush we cut and then spritz the stump with herbicide. The porcelain-berry gets pretty bluish berries on it and people say, ‘Why cut it — it looks so nice.’ But it strangles the trees. We’ve pulled it off the tree trunks like a corkscrew.”

Eradicating these invasives can be a challenge, partly because they have no natural predators. Bonardi said the region’s deer — which have ravaged all the lower-growing native plants in Greenbrook Sanctuary — won’t even take a nibble on most non-native invasives.

That’s why these plants have appeal for homeowners in deer-abundant North Jersey. And many invasives were introduced here because of their beauty. Burning bush is popular because its leaves turn a brilliant scarlet in the fall. Purple loosestrife has long, striking purple flower stalks. The white flowers of multiflora rose plants now accent the grassy swales along the Garden State Parkway.

Without natural predators, the invasives can crowd out native species, which stresses local wildlife. “There’s a link between the native plants and the local birds and insects — they co-evolved and have a symbiotic relationship,” said Linda Rohleder, director of land stewardship at the New York-New Jersey Trail Conference. For instance, monarch butterfly larvae will only eat milkweed leaves.

“If we want to keep the birds and butterflies, we need to protect native plant species,” Rohleder said.

With that in mind, Rohleder has trained about 100 volunteers to identify invasives along trails. They use GPS devices to map the invasives, and then during the summer a group of 80 volunteers remove the interlopers. Since 2011, the Trail Conference has mapped 1,000 miles of trails for invasives.

Some newer invasives that volunteers are seeing more often include the shrubs linden viburnum, Siebold viburnum and jetbead.

The invasives spread by bird droppings — and with help from unsuspecting humans. Rohleder’s work has shown many invasives at trailheads, along the edges of trails, and around trail parking lots, since the tiny seeds of some invasives, such as Japanese stiltgrass, hitch a ride on hikers’ clothing.

There has been some success fighting off these unwanted plants. Chinese weevils, a type of beetle, were introduced to Palisades Interstate Park and Greenbrook Sanctuary a few years ago because they eat the leaves of the mile-a-minute. The weevils have helped control the vine, Bonardi said. “You have to do your homework, and know your enemy,” she said.

More recently, a Celery Farm field that had been overrun by mugwort was cut, sprayed with weed killer and replanted with native grasses, which are thriving.

The Tenafly Nature Center, which struggles to contain barberry, privet, burning bush, wisteria, English ivy, knotweed and day lily, has at least been fortunate that weevils made their way over from Palisades Interstate Park to eat up the mile-a-minute. As part of its forest stewardship plan, the center is working to reduce these invasive plants, said Peter Punzi, the executive director.

The state Department of Environmental Protection has a policy that prohibits planting invasive non-indigenous plant species into state-administered lands and waters.

idgefield, is sponsoring legislation that would prohibit the sale or planting of nine species considered invasive, but others, such as barberry and burning bush, are not included. Another bill sponsored by Assemblyman Tim Eustace, D-Maywood, would require that running bamboo be planted at least 100 feet from property lines and that homeowners keep their bamboo from growing across property lines.

When other states adopted prohibitions on invasives, they often provided a window of a few years for nurseries to sell their remaining stock. That would be a help, the nursery association’s Mondi said, but it wouldn’t eliminate the market disadvantage for New Jersey nurseries unable to grow plants still legal for sale and use in other states.

Another problem, he said, is determining which species to put on an invasives list and how that list would be amended. “They are introducing sterile varieties of species that won’t spread,” he said. “There’s innovative breeding happening all the time. And a plant that’s invasive in one location is not automatically invasive everywhere. Banning a species outright without a more nuanced structure is not helpful.”

Some garden centers have started to address the issue. While people still request porcelain-berry, Metropolitan Plant Exchange in Fort Lee doesn’t sell it, said Jimmy Macaluso, the store’s lead buyer. Nor do they sell linden viburnum. “We’re trying to be more sensitive to the issue,” he said. “We try to steer people to the native species, and people are often fine with them. Some are prettier than the non-natives.”

He said the store sells clumping b

amboo, which is not invasive, and when customers request the invasive golden bamboo, the store suggests they plant it in a container, so the plant can’t send shoots across property lines.

Meanwhile, New Jersey Audubon has a new program to promote garden centers, such as Rohsler’s Allendale Nursery, that agree to stop selling certain invasives in favor of native plants.

Steven Handel, an ecology professor at Rutgers University, is a member of the state’s Invasive Species Council, which was created in 2004 and issued a report listing steps the state should take to reduce invasives.

“To stop selling these invasives would be a big step forward,” Handel said. “And there are some beautiful native plants that are low maintenance and protect our preserved natural areas.

“Our job as educators is to let the public know there are better plants to use in their yards than the ones that have traditionally been used,” he said. “A yard can look green and lush — but still be dangerous.”